Remagnetization during orocline formation. A Carboniferous tale from the Iberian peninsula 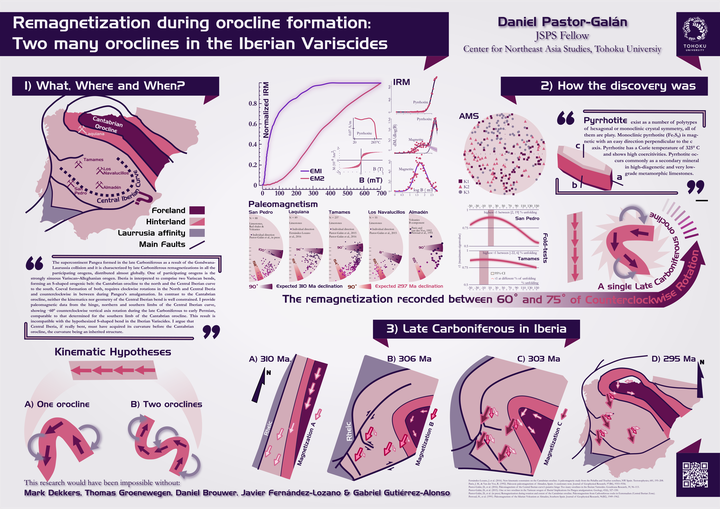 The Variscan mountain belt in Iberia defines a large “S” shape with the Cantabrian Orocline in the north and the Central Iberian curve, an alleged orocline belt of opposite curvature, to the south. The Cantabrian Orocline is kinematically well constrained, but the geometry and kinematics of the Central Iberian curve are still controversial. I have performed extensive paleomagnetic studies to investigate the kinematics of the Central Iberian curve, which plays an important role in the amalgamation of Pangea since it may have accommodated much of the post-collisional deformation. We have performed a paleomagnetic study on Carboniferous granitoids and Cambrian and carboniferous limestones within the hinge of the curve. Paleomagnetic and rock magnetic results show a primary magnetization in Carboniferous granitoids and a widespread Carboniferous remagnetization in the sedimentary rocks studied. Granitoids show ca. 70° counter-clockwise rotations consistent with the southern limb of the Cantabrian Orocline (the one to the north). Post-kinematic granitoids and Cambrian limestones show consistent inclinations but very scattered declinations suggesting that they were magnetized coevally to and after the ~ 70° rotation. Our results show no differential rotations between northern, southern limb and the hinge zone. Therefore, I discard a late Carboniferous oroclinal origin for the Central Iberian curve.